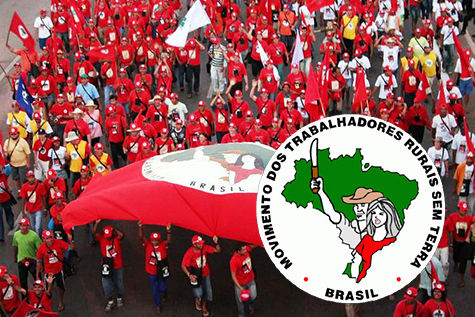 The Landless Workers Movement (Movimento dos Trabalhadores Rurais Sem Terra (MST)) of Brazil sent the following letter of solidarity and support to Comrade Ahmad Sa’adat, imprisoned PFLP General Secretary. The MST is a mass social movement, formed by rural workers and by all those who want to fight for land reform and against injustice and social inequality in rural areas.

We want to express thanks for the beautiful solidarity message that you sent for the Sixth Congress of our organization, which was held early this year. At the Congress, we read the letter to the 18,000 landless workers who committed to strengthen solidarity with the Palestinian people, especially with the prisoners held in Israeli prisons.

Please know that one day we will have the conditions to speak personally with you and with other activists in this legitimate struggle for justice, democracy, and national independence since one day we will see the end of the illegal Israeli occupation of Palestinian lands.

Here in Brazil we are part of  various struggles in defense of the Palestinian people: boycotts and divestment aimed at Israel, marches, solidarity committee meetings, the People’s Tribunal that judged and condemned Israel for crimes of genocide, etc.

Throughout Brazil there were acts of solidarity with the Palestinian people between July and August this year, with special attention to the situation of aggression and genocide against the people of Gaza. Activists of various people’s organizations, the labor movement, the student movement, the various religions (Jews, Christians, Muslims, African religions), the left parties all took to the streets against the government of Israel. In São Paulo, 5000 people marched and surrounded the Israeli consulate building, demanding an end to attacks on Gaza, an end to the Israeli occupation and the release of Palestinian prisoners.

During the week of October 17 to 30, we also participated in the international campaign for their release. We are mobilizing activists from various organizations and conducting gatherings, debates, and meetings and initiating a campaign of letters to be sent to you and your comrades in prison, so they know that even separated by geography, we are with you in this fight that is already victorious.

Despite all that happened in the Gaza massacre and repression by Israel in the West Bank, Jerusalem and the territories occupied in 1948, we realize that major lessons were learned from the popular resistance in the Battle of Gaza. Our hope is strengthened when we see the political unity of the Palestinian people being built in the daily struggle against Israeli occupation. Gaza showed that no single organization can defeat Israeli aggression, but people united by their legitimate organizations become an invincible social force.

You always talk about national unity against the Israeli occupation, and that is the path to victory. It was that way in Vietnam, in overthrowing the apartheid regime in South Africa and here in overthrowing dictatorships in Latin America.

In the history of the struggle of the peoples of Latin America we also had our prisoners and our martyrs, and we learned that struggle and resistance is the only path that can lead to liberation and put an end to injustice.

We just came out of an electoral battle where we succeeding in defeating the candidate of the right, who represented the interests of more conservative and fascist sectors, that is, the pro-Israel political sectors. Zionists in Brazil mobilized in the elections, but were defeated at the polls. We know the limits of bourgeois elections. We do not have any illusions, but Dilma’s victory maintains the most favorable conditions for the struggle in solidarity with the Palestinian people.

Comrade Ahmad Sa’adat, your courage and consistency inspire us, because we live in a time where men and leaders sell themselves, betray their people, abandon their principles and choose the easy path of capitulation and cowardly submission to the enemies of the people. You and your comrades chose the more difficult path, but it’s the most fair way, the most correct way, and the Palestinian people already recognize that sacrifice, and already have the ability to see who are their legitimate representatives in the struggle against Israeli occupation.

At this time we also remember our brothers and sisters peasants, fishermen and women, and farm workers, who suffer from the ban on access to land, water and sea, basic resources that enable them to lead a dignified life.

The struggle of the Palestinian people is a legitimate national liberation movement, inspired by the fundamental principles of the UN Charter and international law. We continue to support the legitimate right of the Palestinian people to continue the struggle for the return of all their lands occupied in 1948, and in 1967 after the Oslo Accords. We are for an end to the Israeli occupation of Palestine, an immediate release of all political prisoners, support for Palestinian national unity, the right of return of all Palestinian refugees and compensation for those who had their homes and property destroyed, an economic, political, cultural and military boycott of Israel, the immediate destruction of the apartheid wall, and an end to the Brazil-Israel military agreements and the Mercosur-Israel Free Trade Treaty.

Comrade Ahmad Sa’adat, please receive the supportive embrace of workers in Brazil and Latin America. Share our solidarity with all Palestinian prisoners of all organizations, because the unity you have achieved within the prisons is coming to the streets of Palestine, and that is the basic condition for victory.