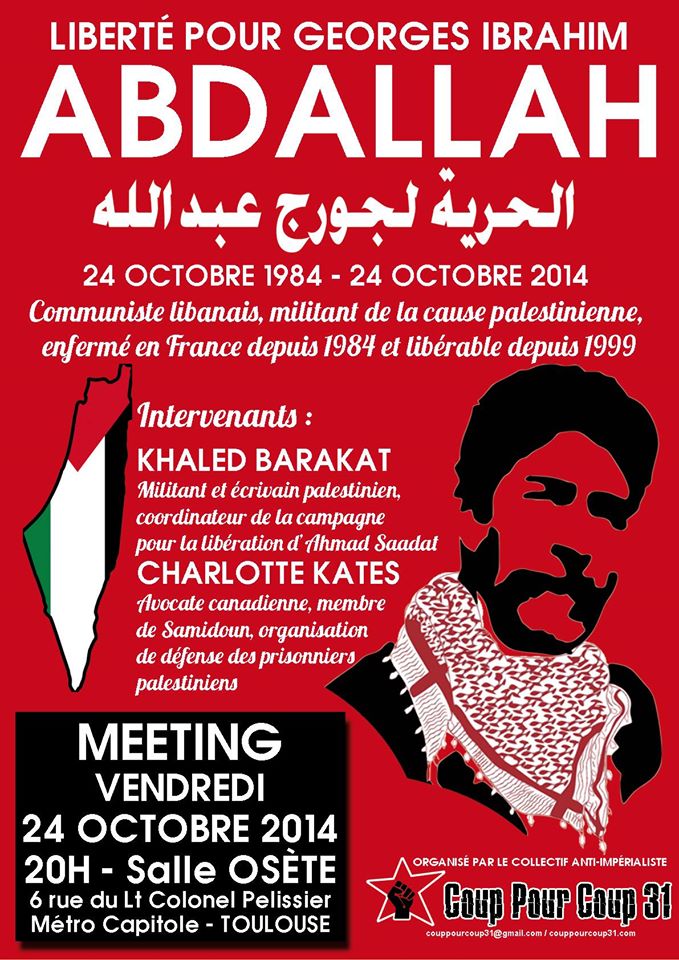 Arab political prisoner for Palestine, Georges Ibrahim Abdallah, has been held in French prisons for over 30 years. Despite multiple approvals of his parole, the dubious evidence in the case, spying by Abdallah’s lawyer, and violations of what are held up to be the regular standards of the French justice system, he has remained in prison after interference from the highest political levels of the French government and US and Israeli interference.

Abdallah, a 63-year-old Lebanese communist, was arrested in Lyon in 1984 and sentenced to life imprisonment for actions claimed by the Lebanese Armed Revolutionary Fraction (FARL). October 24, 2014 marks exactly 30 years since his imprisonment began in France. He has just applied, for the ninth time, for parole and release; he would welcome a return to Lebanon, which has repeatedly expressed its welcome for Abdallah to return to his home.

Anti-imperialist organization Coup Pour Coup 31 is organizing an event on October 24 in Toulouse, France, to be followed by a national demonstration calling for Abdallah’s freedom outside Lannemezan prison, where he is held. The Campaign to Free Ahmad Sa’adat will be participating in these events in France and urges people around the world to raise the call for freedom for Georges Ibrahim Abdallah, an imprisoned struggler for Palestine. “Together, comrades, we will win and it is only together that we shall overcome.” – Georges Ibrahim Abdallah