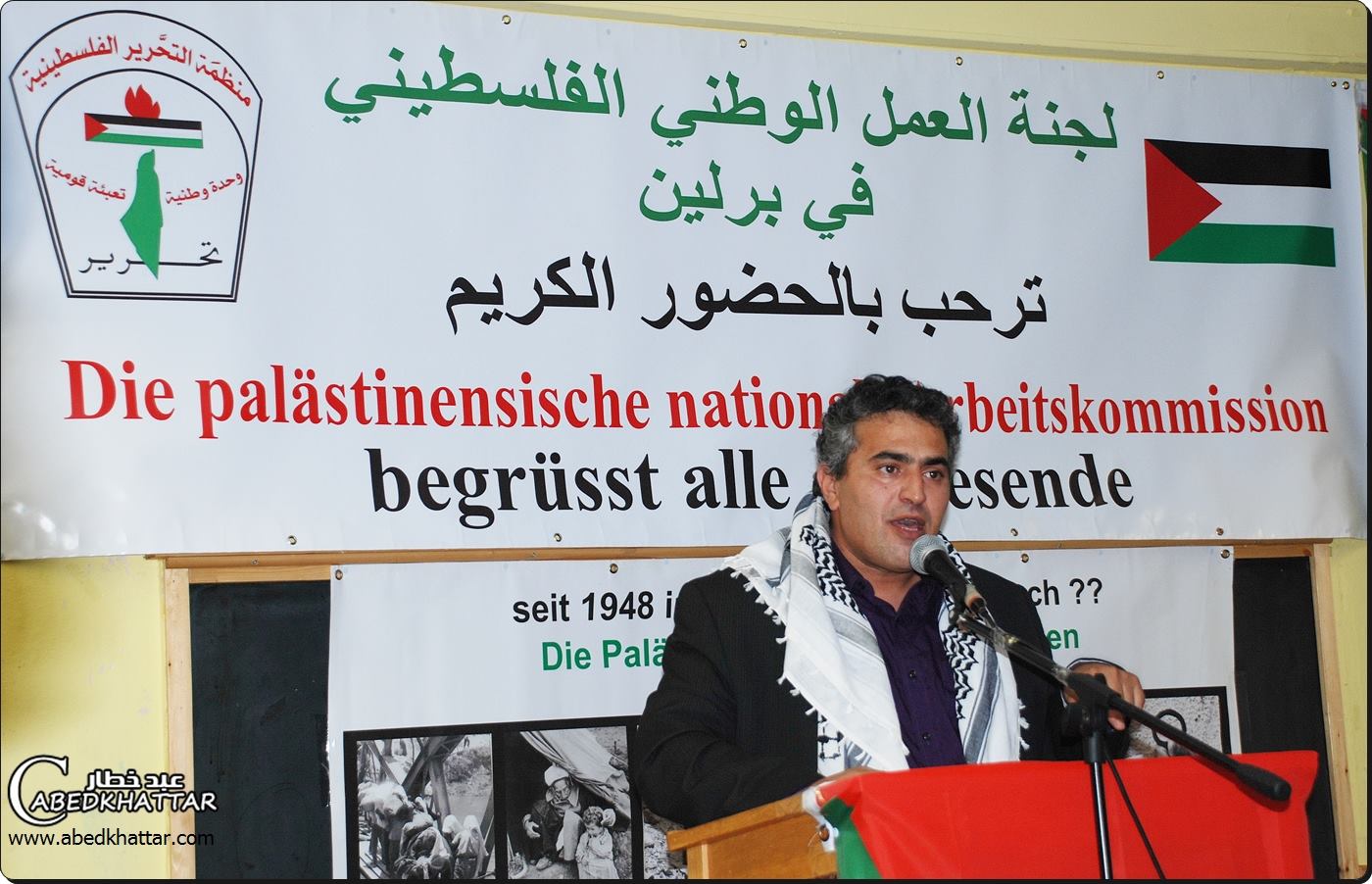 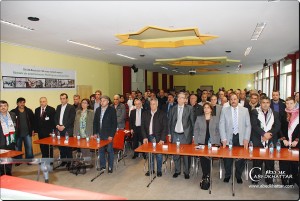 Presenters at the event included a representative of the National Action Commission, who presented a political overview of the event; Norma Khouri, speaking on behalf of BDS-Berlin, regarding the importance of building the boycott campaign against Israeli products and corporations that support Israel as a popular movement to support the Palestinian people; Kholoud Daibes, Palestinian Ambassador to Germany; and Khaled Barakat from the Campaign.

The event also included Palestinian song, poetry and the presentation of a documentary film about the history of the Nakba and the Palestinian struggle for the right to return.

A full video of the event may be seen at: https://www.youtube.com/watch?v=PDtoEJTFwoU (Video by Abed Khattar).

Khaled Barakat’s address may be seen below (Arabic, with English subtitles):

To begin, I salute the members of the Palestinian National Action Commission and their supporters for organizing this national event and for the invitation to participate with you today.

Please allow me to salute on your behalf, before anything, the two martyrs who fell yesterday in the homeland, Nadeem Siyam Nuwarra and Mohammed Odeh Abu Thaher. And also to salute this great steadfastness, this great Palestinian struggle that the Palestinian prisoners’ movement in Israeli jails has been engaged for the past 23 days. We salute the heroic prisoners, and the leaders Ahmad Sa’adat and Marwan Barghouti and all of the leaders of the Palestinian Prisoners’ movement.

Brothers and sisters, comrades, Our Palestinian people have fought like none other, and have paid a dear price for freedom and to achieve their aspirations and goals. It is correct to say that the Palestinian Nakba, what is known as the Nakba, has been continuing for the past 66 years. But long before that, the Palestinian people were in confrontation since the beginning of the last century with the racist camp of the imperialists and Zionists, that has all of the power, money, empire, weapons, and killing machines.

In spite of all this, the Palestinian people have remained steadfast, fighting in the forefront of the Arab nation, have not been broken, have not despaired, and have not given away their rights. They have spent on this road the sacrifices of their sons and daughters, the most precious thing they possess. And we all know this fact, that every time the Palestinian people have carried weapons and stand up and revolt when others thought they have surrendered and died. Every time, our people rise in revolution and intifada that shakes the world. Our people have proven this in all of the stages of their struggle in confronting this racist brutal entity.

The truth that we must say today, after 66 years of the occupation of Palestine, is that our people today still live under occupation, exile, diaspora and siege. The siege is the primary manifestation of the current condition of our people.

Why are the official laws of Lebanon besieging the Palestinian people in Lebanon? I just arrived from Lebanon. There is a status of siege against our people everywhere. Our people are living under siege in Syria, particularly in Yarmouk camp. They are under siege in occupied Palestine 1948, facing the Judaization, Israelization of the land, strangling our people, stealing everything including the heritage and the language.

This siege, the continuing siege: the enemy camp is responsible for this siege, but we must tell the truth, away from all deception and lies and what we hear on the screens of satellite channels. We must ask about the Palestinian and Arab official responsibility for the siege. What is our responsibility, us?

We have the right to stand with courage in front of this very sorrowful and difficult question and search for responsibility and truly examine this moment.

I am discussing this Palestinian leadership that is living this division for over 7 years without shame. Our people are drowning in seas and oceans and these Arab and Palestinian leaders are lying. I know that our people do not believe those who stand behind microphones and appear on satellite channels. They do not believe anyone. Our people have lost faith in all of these defeated leaders. Is this not the truth? Is this the revolution of Kamal ‘Udwan, Ghassan Kanafani, Wadie Haddad and George Habash?

If we want to be faithful to the blood and sacrifices of the martyrs: is this why Izzedine al-Qassam and his comrades fought in Yabud (Jenin)? Did they fight for an authority, or a state? Is this what Abdelqader al-Husseini and his comrades fought for in al-Qastal? For an authority? Is this what the Fedayeen fought for – an Authority? They have set out the path with their blood.

This conflict with the enemy is one of existence and not a conflict of borders and for a state. What do we gain as Palestinian people if Israel concedes a state in the West Bank and Gaza? And they will not do so. But what if they did? Do you see what is happening in the West Bank now? We must be truthful to ourselves – nearly half is controlled by settlements. I am not saying this to discourage you or to score a point. I am saying these words to tell the truth and nothing but the truth. As Ghassan Kanafani said, the truth, all truth to the masses.

Because the siege conditions have pushed our people’s expectations into the lowest level. The Palestinian cause has been diminished because we have been driven away from this revolutionary road set out by these great heroes and leaders.

Today we remember that here in Europe we did have great leaders, martyrs, who carried pens and books and not weapons. Some of them did not even know how to use a gun, but they fought with their free words, their revolutionary and national culture. They were not distant from their people. They established international solidarity movements, the movement to support the Palestinian revolution. And they carried their pens to support armed struggle.

They explained the cause to the world through art, literature, and translation. They were not separated from the revolution, or from the refugees. They organized European popular contingents to support our people in their homeland and in exile. And they were followed by the Zionist movement and the Mossad who killed them and the best of our sons in Europe. Today we remember: Mahmoud al-Hamshari, Naim Khader, Izzedine Qallaq, Majed Abu Sharar and Basil Qubaissi and all of those martyrs who fell in Europe defending our people and our cause. And we tell them – we will not forget and we will not forgive.

National unity can be achieved first and foremost through popular determination. And it will be achieved by the decision of the Palestinian people and not by dialogue between two factions, or more than two factions.

This is the truth that must be told. Today our message to all Palestinian embassies is not to be away from the people. All of the enemy embassies were mobilized in their totality for Shalit [captured occupation soldier]. Where are our embassies in their work for our cause and for the Palestinian prisoners? Where are our enemies in confronting the Zionist enemy and defending Palestinian prisoners? Where are the missions of the PLO that were established by the refugees? This organization [the PLO] was established by the refugees, by their own blood, sweat, and money. And the refugee camps will regain, re-establish this organization.

There is no way that the PLO decision will be hijacked by a handful of people. We must tell the truth and nothing but the truth. We know that there are ambassadors that are playing a positive role and engaging in important work, but this is not a unified policy, this is not a strategy. Frankly, we do not have a Palestinian strategy and we must have a Palestinian united strategy.

It is the right of a Palestinian refugee in Lebanon to care about Haifa, to know about the prisoners, and to understand about the conditions of the refugees everyywhere. Our people in Jordan have the right to participate. They need to have a role and a voice and not to be excluded. Our people in Syria have the right to know about everything related to our cause. These are the rights of our people. This is the cause of our people.

But whenever events happen, what we hear is: stay away from this. We don’t want to interfere in internal Arab conflicts, but is it not my right as a Palestinian to express my views, to choose who represents me? Isn’t it my right as a Palestinian to express a position, to have a place? Is it not our people who have paid the price in blood in the past and continue to do so? So why are they confiscating our decision and our national resolution?

Tens of thousands of Palestinian strengths. But these strengths are being suppressed intentionally. And this must not continue. We need to tell the truth, all the truth, to our people.

How many armies, horses, empires have passed on our land? Our people emerged victorious and our nation always rises again and liberates Jerusalem. This racist entity, my brothers and sisters, will vanish to the garbage of history and our people will rise across this bridge of pain and reach their homeland as liberators, not negotiators.

Long live you, long live Palestine, and victory is inevitable.