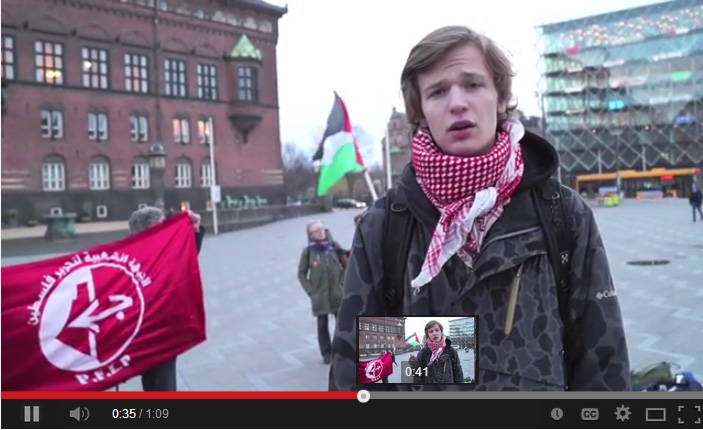 The Internationalt Forum and the Denmark Campaign to Free Ahmad Sa’adat held a demonstration in Town Hall Square on Copenhagen on February 21, 2014.

Flyer distributed at the protest:

Release Ahmad Sa’adat and all

Ahmad Sa’adat is the general secretary of PFLP (The Popular Front for the Liberation of Palestine). He and 6.000 other Palestinians are imprisoned in Israeli jails. They are adult and children, political and union and women activists, lawyers and parlamentarians. Many of them have been exposed to administrative detention, i.e. imprisoned without a trial. The prisoners face daily harassment and torture. The state of Israel is imprisoning them as punishment for their struggle against the occupation.

Ahmad Sa’adat was elected general secretary of the PFLP after the former general secretary Abu Ali Mustafa was murdered by missile attacks of the US and Israel. The PFLP forms an important democratic force in the struggle against the occupation. PFLP is fighting for a secular democratic state with equal rights for Palestinians and Jews and other people, as well as the PFLP is fighting for the right of return of the Palestinian refugees.

Support the struggle for a free Palestine