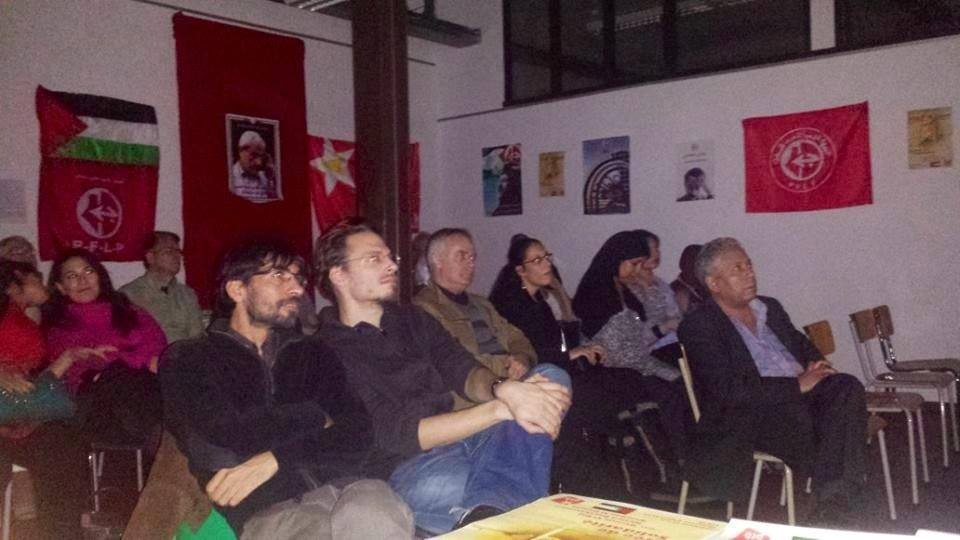 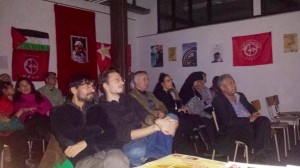 Khaled Barakat, campaign coordinator, spoke via Skype, thanking the Palestinian community and the Workers Party of Belgium and all solidarity forces who stand with the Palestinian people and their just struggle to regain their national rights, and to liberate Palestinian prisoners from Israeli jails without restrictions or conditions. 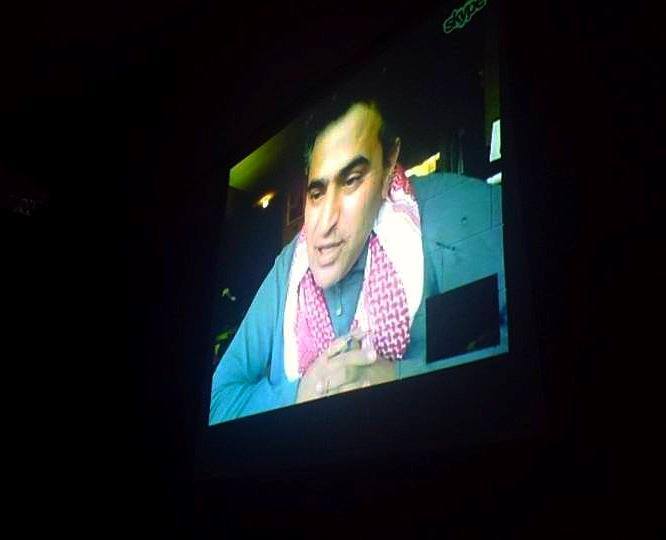 Barakat said that the history of the Palestinian prisoners is a living history that is central to the Palestinian national struggle, since the era of British colonial rule in Palestine and under Israeli occupation since 1948. Throughout those eras, Barakat said, the Palestinian people have known the meaning of prison and detention; a million Palestinians have been arrested and detained in the occupation prisons. There is not one family that has not been impacted by detention and imprisonment of its members or otherwise impacted by the ongoing mass imprisonment of Palestinians as a Zionist policy, he noted. “The prisoners do not call upon us today for sadness or pity, but their struggle does compel us to work hard and take up the responsibility to support the struggles within the prisons, and to free the prisoners and close down all Israeli jails.”

Barakat noted that the prison authorities develop new forms of torture and oppression against Palestinian prisoners, drawing special attention to the policy of isolation and administrative detention without charge or trial. He noted occupation policies to prevent communication between the prisoners and the world, and to prevent family visits for long periods, pointing to the importance of the global progressive movement, and forces of liberation and justice in the world to support the struggle of the Palestinian people. He urged international solidarity activists to support the struggle of the prisoners by expanding popular participation in the international boycott, divestment and sanctions campaigns to isolate Israel, as the occupation state isolates over 5,000 prisoners from their people and their families, in occupation prisons. 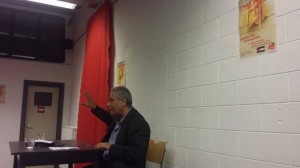 Barakat made a special note of the steadfastness of imprisoned activist Georges Ibrahim Abdallah, held in a French prison for nearly 30 years, calling for a wider movement of solidarity with him to pressure the French government to release him. After speaking, he addressed a number of questions regarding the lack of a strategic unified Palestinian vision for the liberation of prisoners; the role of individual and collective hunger strikes; the impact of the prisoners’ struggles on the Palestinian street; the role of the Palestinian Authority; and challenges faced by solidarity campaigns with the prisoners in occupied Palestine, in the Palestinian diaspora and internationally. 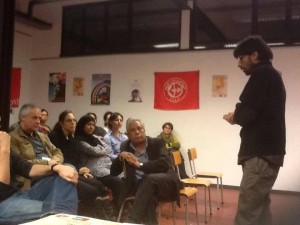 The event also included an exhibition of photos of prisoners and interviews with prisoners, developed by the Collectif Georges Habache of France, whose representative spoke about the importance of listening to the voice of the Palestinian prisoners’ movement and educating the European public about the importance of the prisoners’ struggle as part of the struggle against occupation, and not merely a humanitarian case. They also pointed out that the issue of prisoner highlights the absurdity of the so-called “peace process,” because the most effective means of liberating prisoners has always been through prisoner exchanges and directly confronting the occupation state.