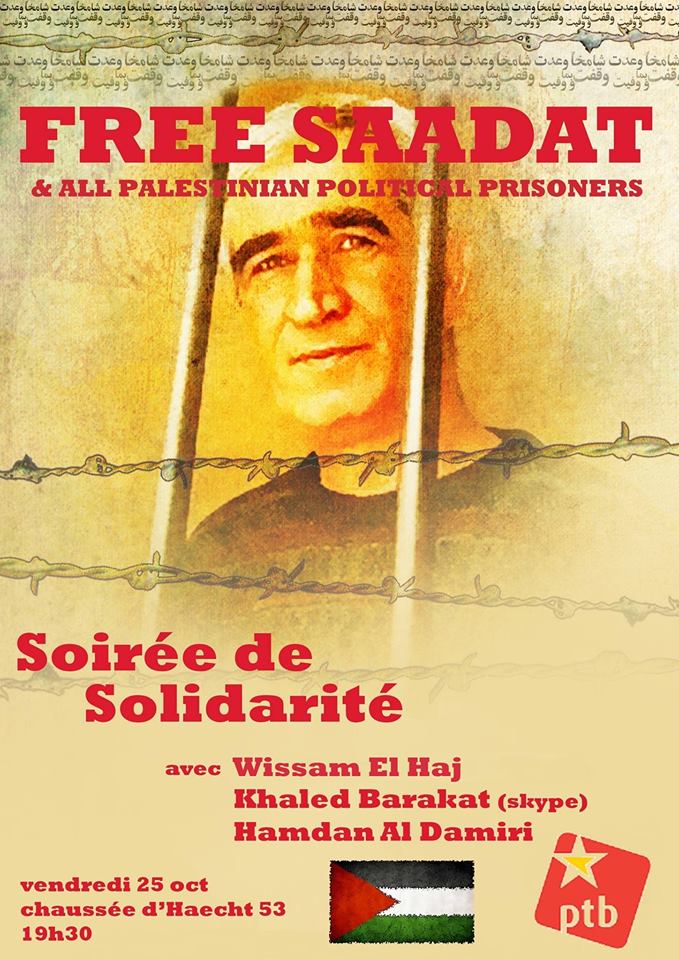 After 11 years of imprisonment of Ahmad Sa’adat, we raise our voices once more to say: Free Ahmad Sa’adat! Free Palestinian Political Prisoners! This year, from October 17-24, 2013, stand for freedom for Ahmad Sa’adat and his fellow Palestinian prisoners. Demand their release and make it clear that they are not forgotten.

Events are taking place around the world. See below – and click here to add yours! 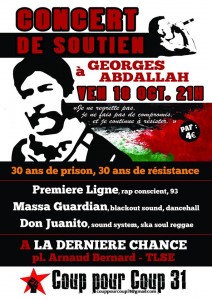 Georges Ibrahim Abdallah is a Lebanese Communist, pro-Palestinian activist, and is the oldest political prisoner in Europe. He has been imprisoned since 1984, releasable since 1999, he has never denied his convictions. He will have been imprisoned for thirty years on October 24.

Join us on Market Street in Manchester and protest outside the shops and companies that are supporting Israel. 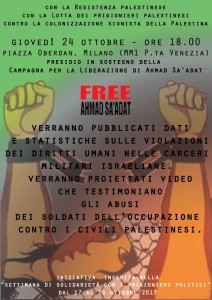 The evening will present data and statistics on human rights violations in Israeli military prisons, and include the screening of videos that testify to the abuses of the occupation soldiers against Palestinian civilians, often children.

Join the Boycott Israeli Apartheid Campaign for awareness-raising about the Palestinian struggle for liberation! The Palestine Awareness Coalition “DISAPPEARING PALESTINE” advertising campaign is continuing. Join us to distribute postcards featuring the advertisement and relevant facts about the dispossession of Palestinian land and people. 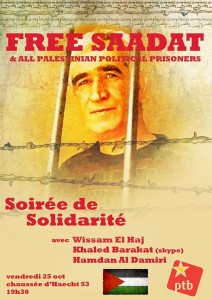 As part of the campaign to free Ahmad Sa’adat and all Palestinian political prisoners, the Workers Party of Belgium is organizing an evening of solidarity in Brussels with members of the Palestinian community.

Hamdan Aldamiri, of the Palestinian Community in Belgium and Wissam El Haj, a Palestinian journalist, will speak, as will Khaled Barakat, spokesperson for Samidoun Palestinian Prisoner Solidarity Network, via Skype. To conclude, Bissan Ahmad will present Palestinian poetry. Refreshments available.

Come out for an evening of food, music, two short documentaries and letter writing and card signing!
Support our comrades who are in prison for us and for freedom!

Eileen & the In-Betweens will be performing some excellent music.

The Campaign to Free Ahmad Sa’adat issued a global call for actions October 17-24, calling for freedom of Sa’adat and fellow Palestinian prisoners.

On the weekend of October 25/26/27, Irish republicans and their supporters will hold various protests and events on at least three continents, Australia, Europe, and North America, to show support for Irish Republican Prisoners. 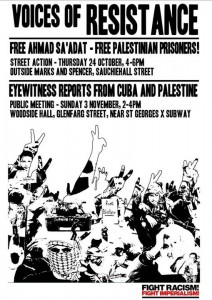 We will also be calling for the immediate release of the Hares Boys and the closure of the G4S-dungeons imprisoning Palestinian children.