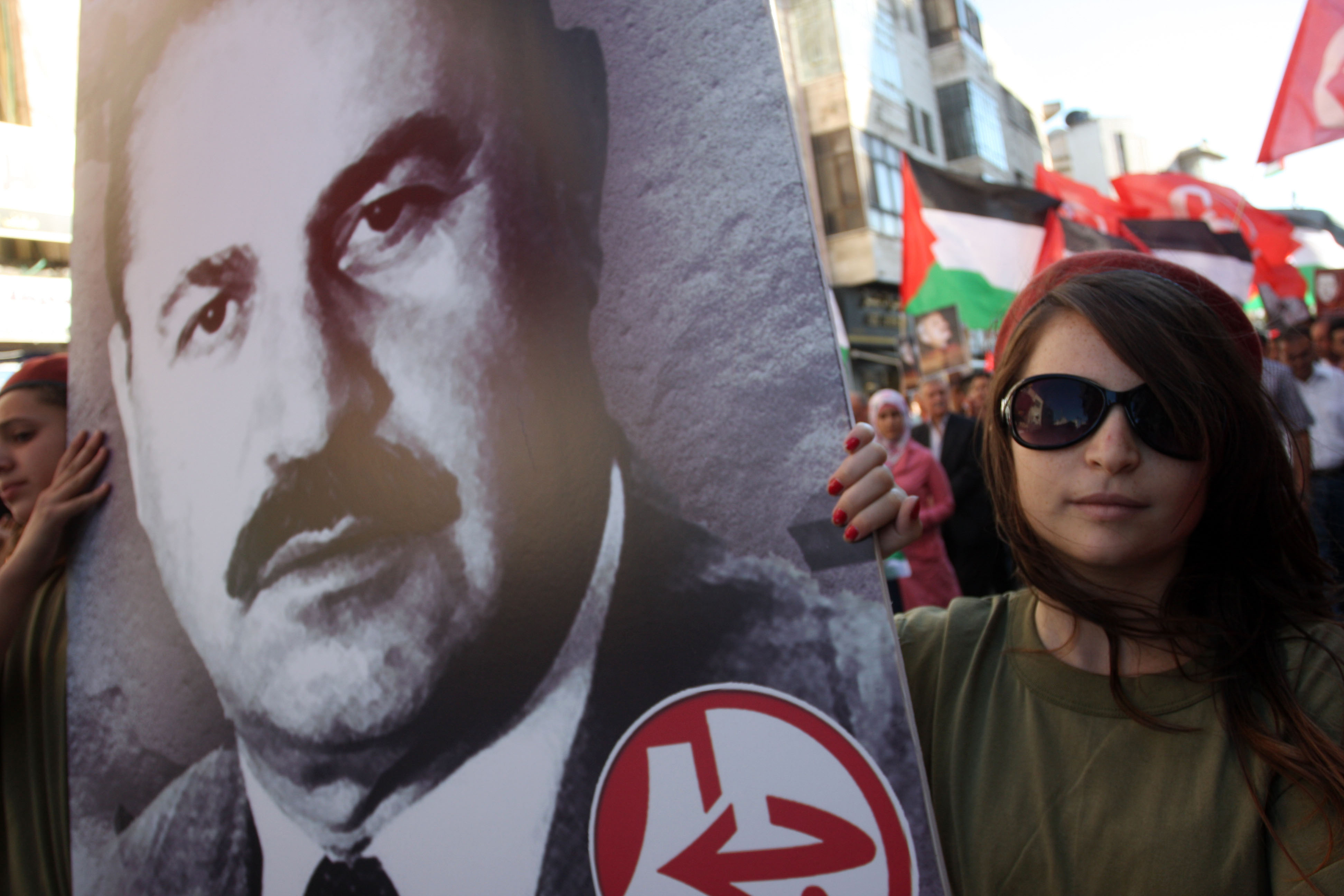 The full text of the letter from General Secretary of the Popular Front for the Liberation of Palestine, imprisoned Palestinian leader Ahmad Sa’adat, from Israeli prison, to the commemoration of Abu Ali Mustafa, assassinated by Israel in his Ramallah office on August 27, 2001. Sa’adat’s letter was read in Gaza on August 27, 2013:

Comrades – today we are on the path of struggle and revolution, marking the memory of August 27, 2001, the martyrdom of our comrade leader Abu Ali Mustafa. The spirit of the martyr leader stands in the skies of our country, alongside the martyrs: George Habash, Yasser Arafat, Ahmed Yassin, Fathi Shikaki, Suleiman Najjab, and alongside the members of the school of revolutionary action Comrades Khaled Abu Aisha, Wadie Haddad, Ghassan Kanafani, Guevara Gaza, Ribhi Haddad, Khaled Dalaicheh, Walid al-Ghoul, Shadia Abu Ghazaleh, Taghreed el-Botmah, Ibrahim al-Rai, al-Akkawi, Khawaja, Yamen Faraj, Nidal Salameh, Raed Nazzal and Ayman al-Razzeh, and all the martyrs whose pure blood was spilled on the land of Palestine.

In these important moments in the history of our party, we remember all of these martyrs and pledge first to continue the struggle until we achieve the national goals for which they sacrificed, and second to take a pause on these occasions to draw lessons and learn from this history, in order to clear our path for the struggle to come.

Comrades, the martyred leader Abu Ali Mustafa has been a model of exceptional and fully revolutionary style of leadership, acting as a leader in theory and in practice and respectful of his comrades. He was the farmer, the worker and the agitator, working on the foundations of scientific theory, and a freedom fighter and leader who worked in all aspects of struggle and lived his life with toughness and determination. He was a theorist and leader, a struggler, a popular fighter in the military arm of the Popular Front who entered all areas of revolutionary work. He was committed to the convictions of struggle, lived poor and died poor, but always armed with the richness of his convictions. In such a difficult phase, from the history of our struggle and the democratic progressive struggle, the models we look toward were embodied in the revolutionary leader Abu Ali Mustafa. His positions were visible, outspoken, and put forward a vision of our reality and its contradictions that obliges us to combat all aspects of division. We firmly believe that ending internal division is a revolutionary and national duty; we affirm and pledge to our martyrs to continue along the covenants we made to them: to preserve national unity and to remain with our weapons addressed to our enemies and never our people.

Everywhere, we commit to the choice of resistance and the path of struggle, to embody our national commitment to revolutionary values and principles that we have learned from the martyrs of our front and our people, despite their different personal convictions or views at one time or another. They continually acted to raise our level of confrontation against the fascist Zionist occupation.

Abu Ali Mustafa was an international, Arab and Palestinian leader, who drew together revolutionary theory and practice, committed to revolution and resistance against the criminal occupier, and the creator of the slogan, “We come back to resist, not to compromise.” He was a symbol of national unity and refusal to accept concessions or hypocrisy.

We all remember his first press conference after his election as General Secretary, when he declared that as long as there are soldiers or settlers on our land with their fingers on the trigger, we will pull the trigger. He addressed his comrades in the first event after his election as General Secretary, directing his message to all of the currents and brigades of the Palestinian Resistance.

Abu Ali was committed to deep principles and the strategy of the Front, centering on the right of return, an end to the Zionist presence, and ending the conflict on the basis of a democratic Palestine capable of providing protection and political and national and civil rights to all its inhabitant of all affiliations. He always maintained that the right of return is the bridge between our current struggle and our rights to all of historic Palestine.

Comrades, as we commemorate the martyrs, we must always integrate this commemoration into the revolutionary struggle against the occupation and work hard to strengthen our internal unity without complacency or fatigue, and promote awareness of this legacy in the minds of the youth. We stand alongside our people, particularly the poor and the most marginalized, in all of their daily concerns. The memory of the martyr leader Abu Ali Mustafa is an opportunity to build our party’s internal front and rectify our errors, solidifying our work and full of hope and optimism for a just and humane future.

Comrades, we march forward along Abu Ali’s path, and the path of al-Hakim, Wadie, Abu Jihad, Nazzal, Shikaki, Al-Jamalina, Guevara, Al-Amssi, and all of the martyrs and our people in the homeland and in exile.

Glory to the martyrs, victory to the revolution, to the pride, dignity and unity of our people. We are inevitably victorious!