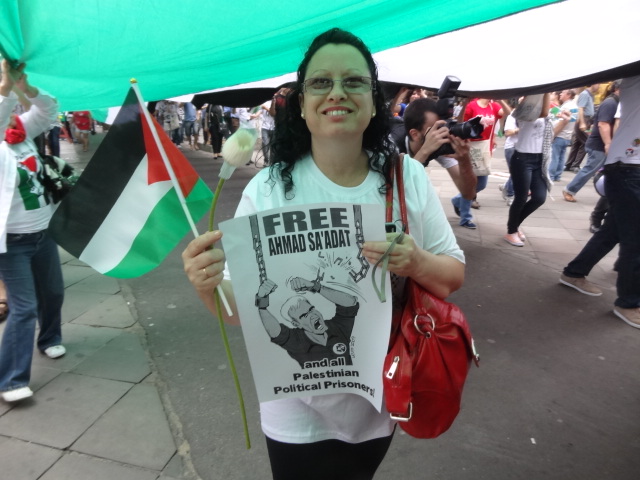 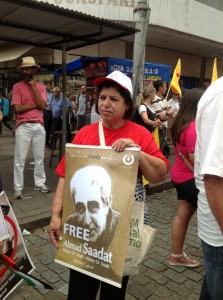 Dear friends: Today I greet you and value fondly your great internationalist role in support of the oppressed peoples and classes for democracy, freedom and social justice, alongside our people confronting aggression, occupation and many forms and practices of colonial racism, debunking the Israeli representation of itself in the role of the victim and supporting the resistance of our people to terrorism. Our people and progressive forces stand together with you in the same trench to defeat imperialism and build a new system of justice and equality based on human needs. This forum builds on our hopes and expectations of a broad movement, with agreement on the state and continental level, and the ceiling of our hopes rise. It dashes the allegations of the theorists of capitalism that victory in the Cold War and the defeat of the Soviet Union is the end of socialism; on the contrary, the theory and practice of socialism, revolution and liberation struggle led by leaders such as Simon Bolivar and Zapata and Guevara and Salvador Allende and Jose Marti and many more, those leaders who led the revolutionary process, is growing and expanding with the dawn of each new day.

Dear Friends: Holding this forum under the title Free Palestine while our people prepare for the Day of Solidarity with the Palestinian People makes us feel the genuine solidarity of the peoples of the earth with our cause, and also reinforces our determination to escalate the struggle for the freedom of our land and people, and the progressive and revolutionary forces and peoples of Asia, Africa and Latin America illuminate our path.

Dear Friends: You meet now as the occupation continues its aggression after Israel stopped all attempts to achieve a political settlement that recognizes our national rights, leaving the people with no choice but the choice of resistance. Israel has launched a comprehensive military aggression on our people in the Gaza Strip, and Israel and its political parties have made the blood of our people pay the price for its propaganda campaign. Israel has exercised the utmost arrogance, dealing with itself as above international law, with the support and encouragement of the U.S. and its allies. This aggression is part of an ongoing series of systematic attacks against our people, including the expansion of settlements, division of the West Bank into ghettos and cantons by building the apartheid wall, isolation and Judaization of Jerusalem, confiscation of land, demolition of homes and displacement of our people through assassinations, mass arrests, and daily settler assaults on our people. 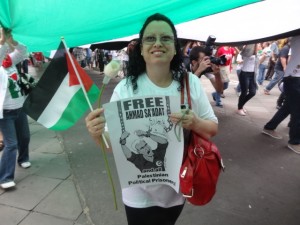 Dear friends: Israel would not have dared to undertake its aggression without international cover, which is provided by the major imperialist powers. It is necessary that the free world coordinate its efforts to stop Israel’s reckless violations of international law and stop their deadly adventures. It is necessary in this arena to establish popular activities under the title, “Stop the aggression on our people and their land, end the siege, and provide international protection for our people.” We also must develop of activities and events to besiege the occupation and its aggressive policies of racism, including expanding the boycott of Israeli products and especially those produced in the settlements and the prosecution of the political, military, settlement and economic leaders of the occupation, to bring them before international criminal courts, citing the Goldstone report and numerous other documentation of Israeli crimes. Alongside the resistance of our people, it is necessary to besiege and isolate the occupation at the international level and put pressure on the forces of the international community to compel Israel to respect international law and the implementation of international resolutions, including our people’s national rights of return, self-determination, and establishment of their independent state.

Dear friends: Before concluding, I bring you greetings on behalf of the Palestinian political prisoners and salute their active role in the Intifadas within the prisons, in September of last year and April of this year, culminating with their steadfastness and support to achieve many of their demands, including dealing a blow to solitary confinement and opening the door to forcing the occupation to deal with our political prisoners as prisoners of war and freedom fighters.

The Palestinian prisoners held fast to their rights, to international law and the Fourth Geneva Convention and directed their cause away from the cycle of Israeli blackmail and pressure upon the Palestinian Authority to make political concessions in futile negotiations with Israel, and instead opened the way for their freedom as part of the freedom of our people from the shackles of the occupation.

Dear friends: Again I salute your most valuable role and I wish all success for your forum that reaffirms my faith in the inevitability of the victory of our people and all oppressed peoples, classes and nations struggling for freedom, our fists raised high and our eyes pointed toward the sun of freedom, the sun of justice, the sun of liberation. Let our motto be: Palestine is an integral part of the cause of freedom, justice and peace in this world.