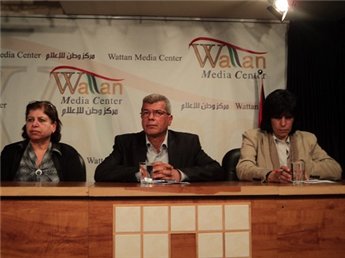 Ahmad Sa’adat, the imprisoned Palestinian national leader, will continue to reject the illegitimate Israeli courts as those courts consider his over six months of isolation in the occupation prisons, said Khalida Jarrar, member of the Political Bureau of the Popular Front for the Liberation of Palestine, at a press conference on October 20, 2009 in Ramallah marking a national day of action for Comrade Sa’adat and all Palestinian prisoners as he confronted an Israeli military court seeking to extend his isolation. 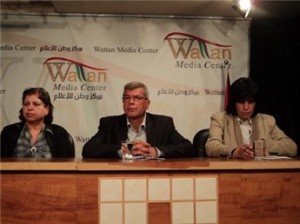 Jarrar said that Sa’adat sees no legitimacy to the courts of the Israeli occupation and that it is because of his adherence to this position that he has continued to be subject to mistreatment and abuse, including over six months isolated from his fellow prisoners and family visits. She emphasized that the occupation uses isolation and solitary confinement against Palestinian prisoners, particularly leaders, to prevent their influence on Palestinian society, politics and decision-making.

Jarrar noted that every time he sends messages to the Palestinian people and leadership through his attorney, he consistently upholds national unity and firm adherence to Palestinian national rights against the occupier. She said that Sa’adat had spent over 15 years in prison since his first arrest in 1969, had a long history as a leader of prisoners within the occupation prisons, and is now sentenced to 30 years in the occupation prisons solely for his political activities as the General Secretary of the Front.

She described his poor health, saying that it has been over three months since she has been allowed to visit him and that she is deeply concerned for his health, noting that he has asthma as well as significant damage to his back, for which he has received no treatment since his kidnapping in 2006. She noted that he is one of dozens of Palestinian prisoners isolated in the occupation jails and barred from family visits.

On Thursday, October 22, she said, Palestinian cities in the West Bank and Gaza will hold sit-ins and events, and on Wednesday, October 21, an outdoor solidarity festival will take place in Ramallah at Manara Square.

She also drew attention to events taking place in North America and Europe, including in France, Greece, San Francisco and Vancouver, where a special issue of Al-Shorouq Newspaper, an Arab newspaper, has been published and distributed emphasizing the struggle of the prisoners.

Furthermore, she said, radio stations are holding numerous programs and interviews about Sa’adat and the prisoners’ cause, due to the actions of the Palestinian Broadcasting Association, and official memoranda are being directed to United Nations officials, embassies and other officials about the prisoners’ case and Sa’adat’s struggle against isolation.

She also said that the Ministry of Prisoners is holding many events and media interviews in order to publicize the case and the prisoners’ cause.

Issa Qaraqe, Minister of Prisoners, called for Israeli officials to be prosecuted for war crimes against Palestinian prisoners, noting that crimes against prisoners were included in the Goldstone report on Gaza war crimes recently adopted by the UN Human Rights Council. He called upon all international agencies to take up their responsibilities and fully investigate, expose and prosecute occupation violations against the prisoners, noting that many human rights organizations in Palestine have provided extensive documentation of such violations.

Qaraqe praised Sa’adat’s steadfast refusal to recognize the courts and the military trials of the occupier, and said that Sa’adat has been the subject of state terrorism by the occupier, citing his kidnapping from the Jericho prison of the Palestinian Authority in 2006 through his current isolation of over six months.

He emphasized that isolation targets prisoners’ leaders and is an attempt to break the will of the prisoners, in order to subjugate this backbone of the Palestinian people, and noted that in July 2009, Sa’adat had already undertaken a 9-day hunger strike in protest of isolation, in which he is deprived of family visits, access to news, goods from the commissary and even cigarettes.

Furthermore, he said that the international conference on prisoners that will take place in November 2009 in Jericho will include an important call for international prosecution of occupation officials for war crimes. He also noted that international agencies and the Palestinian Authority have not lived up to their responsibilities to the Palestinian prisoners, calling past actions weak and utterly insufficient.

Sa’adat was elected General Secretary of the PFLP in 2001 following the assassination of the previous General Secretary, Abu Ali Mustafa, on August 27, 2001 by a U.S.-made Apache missile shot from an occupation military helicopter as he sat in his office in Ramallah. He was abducted by Palestinian Authority security forces after engaging in a meeting under false pretenses in February 2002, and was held in the Muqata’ until April 2002, when in an agreement with Israel, the U.S. and Britain, he and four of his s were held in the Palestinian Authority’s Jericho prison, under U.S. and British guard.

He remained in the PA jails, without trial or charge, an imprisonment that was internationally condemned, until March 14, 2006, when the prison itself was besieged by the occupation army and he and his comrades were kidnapped. Since then, he has been held in the prisons of the occupation. He was sentenced to thirty years in prison on December 25, 2008 solely for his political activity, and has spent over six months in isolation at the present time.