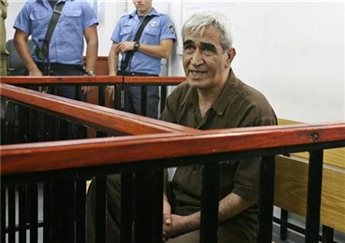 Ahmad Sa’adat, General Secretary of the Popular Front for the Liberation of Palestine, said in a letter issued from isolation in Asqelan prison where he is held by the Israeli occupation, that the so-called “two state solution” is dangerous, threatens the right of return and the very existence of the Palestinian people in the occupied lands of Palestine ’48.

The letter was sent on May 30, 2009 to the Preparatory Committee for the Palestinian National Day in Sweden. Sa’adat stated in the letter, which greeted the Palestinian and Arab communities and their consistent work to defend our rights, that the only termination of the historical and substantive conflict with the occupation is the end of Zionist rule in Palestine, the establishment of democracy and the achievement of the right of return. He noted that ending the Zionist project was the only real solution for the Palestinian people, while the so-called “two state solution” only opens the door for the acceptance of the “Jewish state,” a racist concept based on the expulsion of our people.

Sa’adat also greeted the people of European countries who stood beside the Palestinian people in the face of the recent war on Gaza, and other international solidarity forces, particularly noting the leadership of Venezuelan Bolivarian president Hugo Chavez.

He stated, “I am honored to participate in these events marking the 61st anniversary of al-Nakba, in defense of our national and historical rights, particularly the right to return to our homeland. These are the rights affirmed by our national leaders and martyrs, including al-Hakim, Dr. George Habash, Abu Ali Mustafa and Sabir Mohieddin. They are not only the essence of the Palestinian cause but also the bridge for our nation and the democratization of all of historic Palestine.”

The following is the text of the letter in full:

“I am honored to participate in these events marking the 61st anniversary of al-Nakba, in defense of our national and historical rights, particularly the right to return to our homeland. These are the rights affirmed by our national leaders and martyrs, including al-Hakim, Dr. George Habash, Abu Ali Mustafa and Sabir Mohieddin. They are not only the essence of the Palestinian cause but also the bridge to our nation and the democratization of all of historic Palestine.

I salute you and your valuable efforts, which have filled in the gaps left in the absence of the PLO and the marginalization of a powerful leadership for the Palestinian cause.

I also pay tribute to all Arab and Palestinian groups that work tirelessly to defend our rights and salute all the popular progressive and democratic international forces who stood by our people in their just struggle for their right to independence and return. I would also like to pay tribute to the attitude of some European countries who have taken an independent position in regard to our people, and our right to democracy, and stood beside our people in the face of the recent barbaric war on Gaza, in particular Sweden and Norway, and the Bolivarian nations of Latin America, led by Venezuelan President Hugo Chavez.

The right of return has not snd will not be extinguished by prescription, and we have maintained our presence in the defense of this right. However, that does not eliminate the risks that beset the right to return, as since Camp David and the dismantlement of most of the Arab national project of confrontation of the Zionist enemy, what has remained is only a “pragmatic” Palestinian policy situated in the context of a “settlement.” This course went through Madrid and Oslo, detached from our Palestinian national constants dismantling our project of national liberation.

This caused great damage to our national liberation project, as does the national and Arab impotence displayed by the Arab initiative, which weakened the right of return through the use of ambiguous language that appeared in the text. The stress that is required at the Palestinian and Arab national level is to end any confusion, and to distinguish clearly between the end of the occupation and the end of the conflict.

The end of the historic conflict and the objective can only be an end to the Zionist entity and the establishment of democracy throughout all of Palestine, through the implementation of the Palestinian right of return. The slogan of “two states for two peoples” that are being voiced only opens the door to the acceptance of Israel as a “Jewish state,” which threatens not only our right to return, but also the existence of the masses of our people in the occupied part of Palestine 1948 on the ground where they were born and where they have remained firmly rooted and strong in the land.

I am aware that the Palestinian reality at this time of the division of our people does not provide a climate of substantial achievements in terms of correction of Palestinian politics and tactics for managing the conflict with the occupation. However, the common denominators that were agreed upon in Cairo in 2005, and the document of national reconciliation as the basis for Palestinian unity will lead to the rebuilding of the institutions of the Palestinian people, foremost among them the PLO, the political entity of the whole Palestinian people, and the objectives of the unity our our people and our national rights, including the right to return. On this basis, I call on the masses of our people in the diaspora to lift their voices in order to end the Palestinian division and to rebuild the Palestine Liberation Organization a democratic way as a national instrument for the national democratic struggle, qualified to lead our people in their struggle and to take leadership at the strategic level to meet the challenges and maintain our national objectives on the road to their achievement. I have no doubt that those national objectives will be achieved.

I trust you and your ability and energy and the energies of our people and the pan-Arab popular forces of various political colors. They are committed to the project to confront American imperialist hegemony and control of the region and the world as well as to support our allies and their people and the popular and progressive forces on an international level. I am confident that our people and the rest of the marginalized and oppressed peoples of the world, as well as the poor and marginalized countries in the world who are leading the forces of progress today, have their feet firmly placed on the road to defeat all of the projects and plans of imperialism and racism, and will establish the new international order based on justice, equality and brotherhood among peoples, peace and social progress and will renounce all forms of racial discrimination and national and class national oppression. Victory is certain!

General Secretary, Popular Front for the Liberation of Palestine

From the isolation cell in Asqelan prison