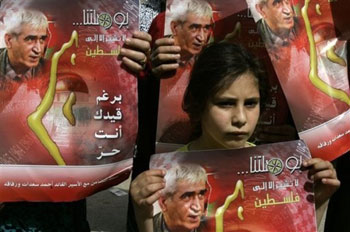 The Campaign to Free Ahmad Sa’adat is urgently calling on all supporters of the Palestinian people, and all supporters of justice and freedom, to organize and act in solidarity with Ahmad Sa’adat, the imprisoned Palestinian national leader on or before December 25, 2008. Sa’adat, the General Secretary of the Popular Front for the Liberation of Palestine and an elected member of the Palestinian Legislative Council, has been imprisoned in Israeli jails alongside 11,000 of his Palestinian brothers and sisters since March 14, 2006, when he was abducted by Israeli occupation forces, following the siege on Jericho Prison on March 13, 2006, in which Sa’adat and five other Palestinian political prisoners were abducted by the Israeli occupation military.

On December 25, 2008, Ahmad Sa’adat is expected to be sentenced in what is being called the final court session in his case.

During his two and one-half years in Israeli jails, Sa’adat has steadfastly refused to grant any legitimacy to the military courts of the occupation. His statements to the court have repeatedly underlined his approach to these military tribunals – rejecting their authority entirely as illegitimate and invalid, the attempts of the occupying authority to utilize a court system to continue its war against the Palestinian people.

His military trial has been repeatedly postponed and has stretched over dozens of hearings since March 2006. With sentencing looming, it is urgent that the case of Ahmad Sa’adat – and his fellow Palestinian prisoners – receive the utmost attention and solidarity of people around the world at this urgent time.

It is particularly important to note that Ahmad Sa’adat and his comrades were kidnapped in an assault on the Palestinian Authority prison at Jericho, where he was held in a PA prison, at the behest of the U.S., Britain and Israel, and guarded over by U.S. and British guards. Sa’adat’s case directly implicates the leading role of the United States and Britain in the ongoing assault against the Palestinian people.

Just as the governments of the U.S. and Britain facilitated his imprisonment, the people of the world’s support is needed to stand for his freedom. In addition, Sa’adat’s case speaks directly to the dangerous and inexcusable practice of “security cooperation” with the Israeli occupation on the part of the Palestinian Authority, under which he was held for four years without charge by the PA, the U.S. and Britain under the demands and dictates of Israel.

What Can You Do?

1. Attend the court hearing on December 25 – The Campaign to Free Ahmad Sa’adat is calling upon lawyers, parliamentarians and human rights activists to attend the military court as human rights observers and lend a strong presence in support of Ahmad Sa’adat and Palestinian prisoners. If you are interested in attending, please contact the Campaign at campaign@freeahmadsaadat.org!

3. Inform others and call for action – Forward this call, and the Campaign’s site, https://freeahmadsaadat.org/, to others! There, you can sign petitions to free Ahmad Sa’adat and all Palestinian prisoners, and call upon parliamentarians and human rights organizations to take action about this case.

4. Hold an event or activity to support Ahmad Sa’adat and Palestinian prisoners – From an educational event to a demonstration at an Israeli consulate, raise your voices in support of Sa’adat, and all 11,000 prisoners inside the jails of the occupation. Please send your reports and photos to campaign@freeahmadsaadat.org!