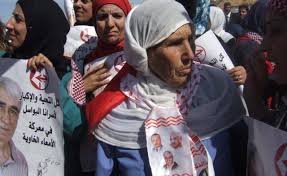 The military court hearing for Ahmad Sa’adat was postponed once again by the occupation on November 25, 2008, until December 5, 2008. On the occasion of the hearing, events in solidarity took place throughout the Gaza Strip, the West Bank and the Arab world.

Many leaders, cadres and members of the Popular Front for the Liberation of Palestine, as well as many leaders of the national and Islamic factions and large crowds of supporters participated in the actions and demonstrations held throughout the day. A protest was held at the headquarters of the International Committee of the Red Cross in Gaza City. Dr. Mariam abu Daqqa spoke at the event, sending greetings of resistance and steadfastness to Sa’adat.

Dr. Abu Daqqa condemned the crimes of the occupation against Sa’adat and the prisoners and called upon all forces for freedom, justice and peace in the world to uphold the cause of the prisoners. She emphasized the importance of national unity, stating that the only party to benefit from division is the occupier. She pointed to the assault on Jericho prison on March 14, 2006, a heinous crime against Sa’adat and his comrades Ahed Abu Ghoulmeh, Basel al-Asmar, Hamdi Qur’an and Majdi Rimawi, as they were kidnapped before the eyes of the world and with the active complicity of the U.S. and Britain.

Abdel Hamid abu Jiab, member of the Political Bureau of the Democratic Front for the Liberation of Palestine, also spoke at the rally, emphasizing that Sa’adat’s rejection of the court is a symbol of his ongoing resistance and struggle for liberation and return.

In Ramallah, a sit-in took place in which hundreds of national and social figures, representatives of unions and civil society institutions took place outside the ICRC headquarters in Ramallah, demanding the release of Sa’adat and all Palestinian prisoners and detainees.

Abdel-Rahim Mallouh, Deputy General Secretary of the PFLP delivered a speech praising the struggle of the prisoners for freedom against the terrorist state of Israel. He called for the struggle of the prisoners to be a first priority for all national institutions. Khalida Jarrar, member of the Political Bureau of the PFLP also spoke, condemning the unfair, unacceptable military courts and pointing to national unity as the means to support the prisoners, highlighting that the occupier makes no distinction as to the Palestinian factions and that the prisoners’ unity has been an example for the entire national movement.

In Jenin, a protest was held in front of the ICRC office in solidarity with Sa’adat, led by veteran former political prisoners. The protest was held in conjunction with the Popular Committee for the Release of the Prisoners, the Prisoners’ Society, and the Commission on Prisoners in Jenin province. A number of citizens, families of prisoners and women’s groups in Jenin province participated in the protest and sit-in, raising the Palestinian flag and posters of Sa’adat. Protestors urged international institutions, particularly the ICRC, to pressure the Zionists to release Sa’adat and all of the prisoners.

Jaafar Abu Salah delivered a statement of the PFLP, and called for future events and actions in solidarity with the prisoners and emphasized the importance of national unity. Mustafa Malhis read a letter delivered to the ICRC by the Popular Committee for the Release of the Priosners and the Prisoners’ Society and the Committee on Prisoners, holding the Israeli government fully responsible for the lives of the prisoners.

In Khan Younis, a mass rally took place in front of the ICRC office in which many national leaders, in addition to dozens of leaders, cadres and members of the Front, took place, calling for solidarity with Sa’adat. Nabil Agha, of Fateh, stressed that Sa’adat is on trial as a hero and a symbol of the national Palestinian struggle, and called for the intensification of efforts to support the prisoners. Hijazi Abu Shanab of the Palestinian Left Front, a member of the Central Committeeof the People’s Party said that Sa’adat is not alone before the occupation court, but all of the Palestiniann people, the Arab nation and the international supporters of justice and freedom stand beside him and support him.

The Khan Younis protest delivered a letter to the ICRC calling upon it to hold the occupation accountable for the crimes against the prisoners and to work to secure their release. The protestors carried Palestinian flags and posters with the picture of Sa’adat, and chanted for the freedom of the prisoners, the victory of the resistance, and national unity.

In Syria, the Front organized a sit-in rally in front of the ICRC office and the office of the European Union in Damascus, calling for international action and support for the case of Sa’adat and all of the Palestinian prisoners.

Also in Syria, in Neirab refugee camp, a large meeting in support of Sa’adat was held in the office of the PFLP, drawing many activists in the right of return movement. Many representatives of Palestinian organizations spoke about the need to uphold the right of return and defend the prisoners, specifically paying tribute to the steadfastness of Sa’adat and his rejection of the illegitimate military court. Mohammad Hafiz spoke on behalf of the PFLP, stating that solidarity with Sa’adat is not with one man or one leader, but with all of the prisoners held inside the Zionist jails, and part of upholding our resistance and our national rights. He emphasized the importance of national unity and upholding Palestinian constants and national rights.

In the province of Rafah, the Popular Front for the Liberation of Palestine held a mass march under the slogan “No to the trial of the resistance! No to the illegal persecution of Sa’adat!” The march included many members and leaders of the PFLP and many other residents of Rafah.

Turkish organizations organized a series of solidarity actions with Ahmad Sa’adat on November 25, in which many people – Palestinians, Turks, Arabs and internationals participated and attended a sit-in and delivered a letter to the Turkish Ministry of Justice. The protestors condemned the racist policies of the occupation and demanded the release of Sa’adat, and all prisoners from Israeli jails.