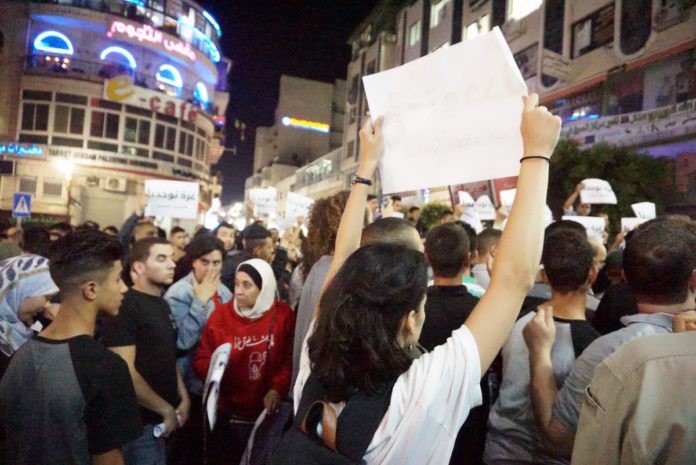 The continued steadfastness of our brave Palestinian people in the Gaza Strip, in the March of Return and Breaking the Siege imposed on our people, has exemplified the finest themes of sacrifice, love and creativity. Nevertheless, the monopolistic leadership in the Authority and the PLO continues to impose unjust sanctions against our people in the Strip of resistance. The frenzied attempts to suppress any voice of criticism or protest against this unjust decision and demanding its end has led to the blatant, unbridled repression of the peaceful, democratic youth movements that have emerged in the West Bank. We have also seen echoes of this repression by the security services of the ruling authority in the Gaza Strip against protests to call for an end to division. In the West Bank, this is accompanied by representatives of the Authority and statements of the PLO threatening the masses of the Palestinia people with further repression and the stifling of public freedoms. Some of these voices of the Authority style themselves as judges of treason of this or that faction and protectors of “legitimacy.”

These serious abuses, which, if they continue and are not confronted seriously with those responsible being held accountable, will put our people on the lip of a volcano that can explode at any moment. At the same time, this situation raises more than a mere question mark about the credibility of this leadership’s purported rejection of the so-called “deal of the century,” the current form of the U.S.-Zionist attack on the Palestinian people that aims to liquidate the Palestinian cause and the national rights of our people. It aims to impose complete dominance over our nation. The true path to confront the U.S.-Zionist attacks at this critical moment must begin with ending the sanctions and strengthening the steadfastness and resistance of our people in the Gaza Strip. This means using the Palestinian National Fund as a source of leverage to mobilize our people and a font of internal strength rather than a weapon of dominance. This is necessary in order to overcome the adverse effects that arose from the convening of the illegitimate session of the Palestinian National Council, in violation of national consensus. Inustead, what is needed is a unified strategy of struggle to organize the resistance of our people everywhere and the construction of mechanisms of leadership, first and foremost, the PLO, as an umbrella vessel and a competent leadership of the Palestinian people everywhere they are.