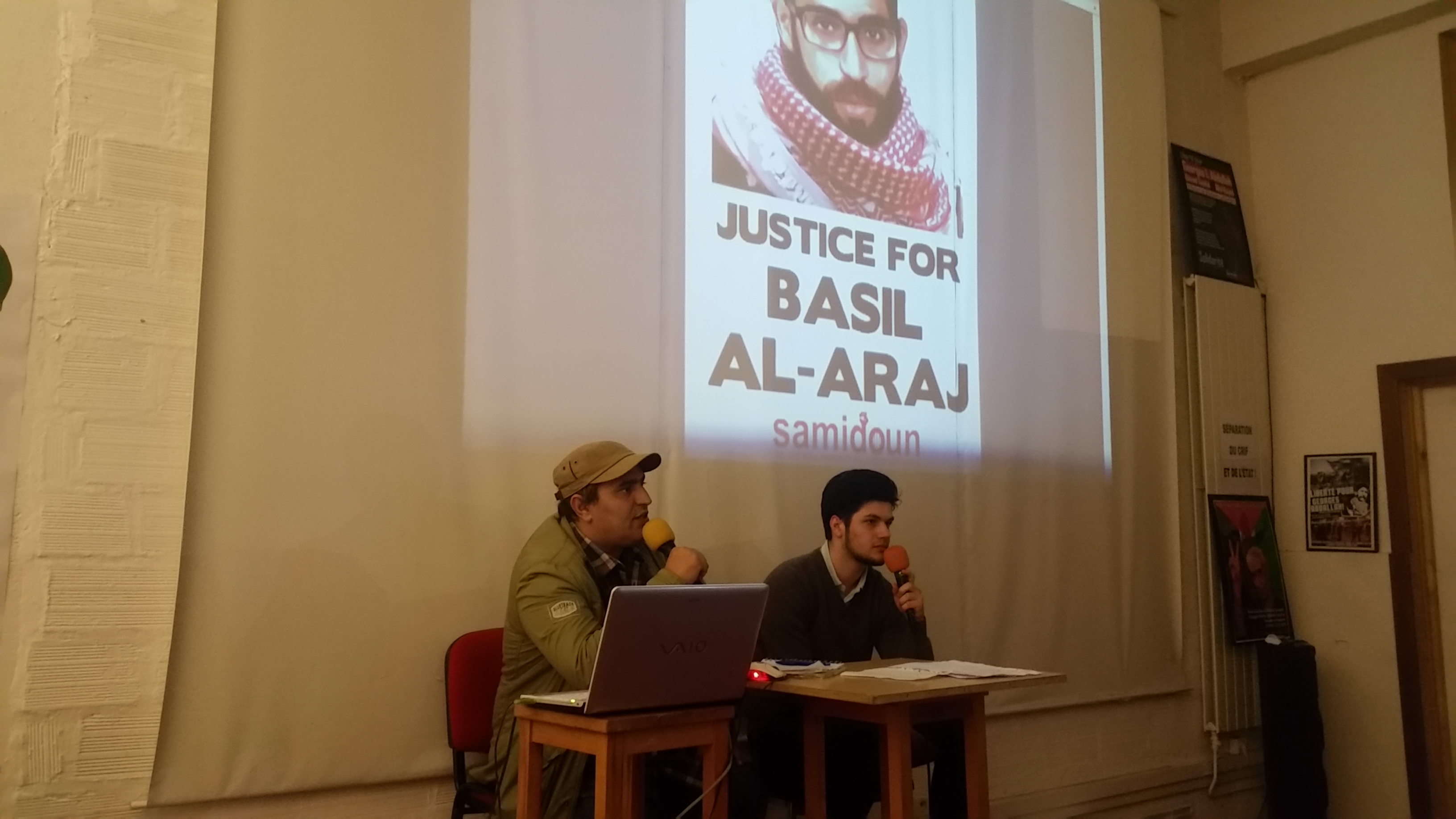 Excerpts from the speech of Khaled Barakat, international coordinator of the Campaign to Free Ahmad Sa’adat, at the unified meeting to Free Georges Abdallah, held on 18 March at Librarie Resistances in Paris, France:

“One of the most important propositions that was discussed today is about the youth and their participation in our movement. And I would like to take this opportunity to remember our young comrade, Basil al-Araj, recently assassinated by the occupation in Palestine, and to make a point in this meeting to condemn his assassination and the ongoing violence faced daily by our comrades in Palestine. It is critical to know that our future depends on the organization and participation of youth in all of our struggles.

“The year 2017 is very important for us as Palestinians, for several reasons. This year marks 100 years of struggle against occupation and colonization. And this brings us to two important points: the first is that Palestine continues today to be occupied and colonized, and the second is that the Palestinian people, far from being defeated, continue to struggle.

“When we mobilize for Palestine, it is important to highlight the case of Comrade Georges Abdallah, because this is not merely an individual case but one for the entire movement. It is a cause for every communist.

“We all agree that the primary criminal in this story is the French imperialist state that arrested Georges Abdallah and has kept him imprisoned for 33 years. And I think we also agree to underline the role of the United States and Israel in this matter. But we should also discuss the responsibility of the Lebanese government in this case.

“We must also raise our struggle towards the Lebanese government, which has not taken its responsibilities seriously in this case, for example, with protests at Lebanese embassies.

“Recently, Lebanese officials welcomed the leader of the National Front, which reflects the shamelessness of their relationship with France.

“Let us look instead at the example set by Cuba, who posted portraits of their five political prisoners in the United States in the Havana airport and all over in the streets. Meanwhile, the Lebanese government has left Georges Abdallah in France, without concern. This is a shame!

“The Lebanese government has not hesitated to release criminals, from thieves to assassins, who are now participants in Lebanese politics. On the other hand, there is no effort exerted for Georges Abdallah.

“The idea that was raised today at this meeting, to send a delegation to Lebanon, is something that we support. We must take action to free Georges Abdallah and this must be the year of his liberation.

“There is a growing movement for Georges Abdallah’s freedom that has been building, especially in the last 10 years around the world, and it is time to build this movement by rallying in popular neighborhoods and among the popular classes, because Georges Abdallah is fighting for them, and he is their comrade and ally.

“It is also important to organize days and weeks of action, especially in 2017 as we mark the 100th anniversary of Lenin’s revolution. Indeed, if we observe that the radical revolutionary left in the world is not united, if there is one thing we must do on this centenary, it is to take action in a real way and step forward toward unity of the revolutionary left, internationally.

“When will the oppressor realize that the cost of keeping a political prisoner in prison is too high? When the voice of the prisoner becomes so loud that it is echoed everywhere in the voices of the popular classes. We must show the French government that the cost of imprisoning him is too high, so that it must release Georges Abdallah.

“As you know, Georges could have been released a long time ago, if he had sold his soul and his principles, he could have returned to Lebanon. He did not do so, because he is a true revolutionary, a true communist.

“What we must do, to make his 33 years of life spent in prison worthwhile, something that has value, is to carry forward his voice, to defend it, and to make sure that the French government regrets having imprisoned him for 33 years.